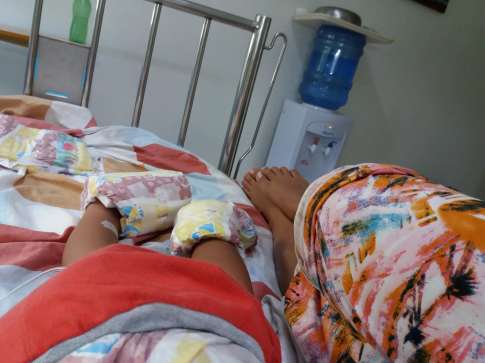 Just arrived from a week of confinement in the hospital. My son Philnand needs to undergo a biopsy to confirm if he has Hirschsprung’s disease! As a mother of two kids who experienced going to the hospital of a similar procedure, the fear of the needle hasn’t changed. It was a challenge to show to our kids and encourage them to cooperate while looking at the needle being inserted into their tiny veins. There were many instances that inserting the intravenous therapy could take more than twice to successfully get its position because kids veins were not easy to find. I wanted to run and give up for the procedure. Cry with them, as they cry when they look at my eyes which seems to say “I am scared, please help me, get away from everybody’s grasp”. I have been holding my tears in the hospital. I wanted to scream and cry out loud, ask God why! But, I needed to show to them that everything’s gonna be ok. I needed to stay positive. I needed to hold back my tears because my husband is there working hard overseas! I wanted to give up, but as a parent giving up is not and should not be part of our choice. Our option is to always move forward for our kids no matter what the obstacles may be. And there even, sometimes my tears fell while holding, hugging and singing his favorite song lullaby for an IV, I needed to let him go through the procedure because it is needed! We needed to confirm what was the cause of him not pooping for 2 – 5 days and to confirm the findings of the barium enema that says possible Hirschsprung’s. Oh, Hirschsprung’s why oh why are you in our genes?!!! You have cost so much to our family!

Inserting IV ( Intravenous therapy) to kids is not just a struggle for the kids but also for the parents and the nurses. But, between a wife and a husband, I believe husbands have a low tolerance of enduring fear when watching their kids struggling with IV insertion. I remember my husband when he went home for my eldest son’s surgery for Hirschsprung’s disease, he was struggling to watch my son, screaming and crying while nurses were trying to insert IV more than twice. He got angry and thought the nurses were just practicing  IV insertion and went to the nurse station and look for an expert. So, I asked him to go outside the room not to watch his son with IV being inserted and I will take care of our son and with my mother. I understand sometimes it takes many times to insert the IV because kids veins are so small and not visible my sisters who are in the medical profession explained it to me.

And according to study initiated in Toronto Canada published in science direct:  24% of parents and 63% of children reported a fear of needles. Needle fear was the primary reason for immunization non-compliance for 7% and 8% of parents and children, respectively.

According to Contemporary Pediatrics,  there are also several studies that urge clinician to consider needle fears.

With Philnand, the good thing, I observe the hospital has improved in terms of the quality system. They indeed considered needle fear when inserting IV.

I observed they followed a procedure; before inserting the IV, they needed to be sure of the veins location, they have veins tracing tool. It took an hour to look for his veins. I just let them be than trying many times and they would fail. I told them “it’s ok just take time to look for the veins” so they won’t get pressured. They inserted twice but failed, because my son was tan, was difficult to locate his veins. The third time they tried the feet and the doctor was there to assist them. Finally, the IV was inserted. They asked a diaper to protect the IV from moving. After the IV was inserted, my son was screaming looking at his feet “so strange” he was kicking,  “My feet! My feet!”. The nurses got another diaper to cover the other foot to put weight on his feet from kicking so much and move the other foot which has an IV. And the other reason was, for the child not to look at the difference between his normal foot and the “Godzilla Foot”. We used to call it “Godzilla Feet” because he likes a Godzilla just to give a fun ambiance. After few hours he got used to it.